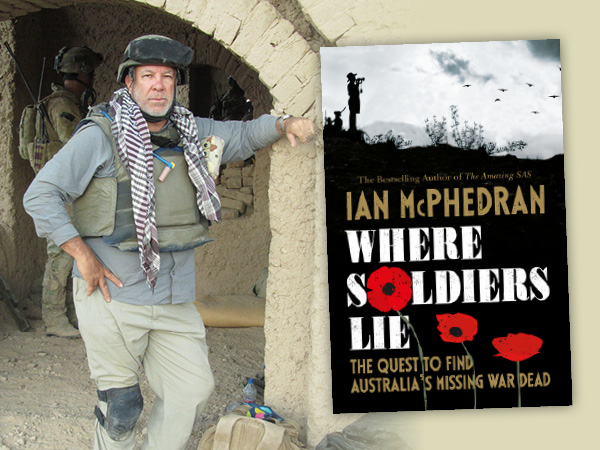 Come an enjoy a Literary Evening with Author Ian McPhedran who will talk about his latest book “Where Soldiers Lie”. The night will include canapes, complimentary first drink and lucky door ticket for a chance to win a complimentary copy of the book. Hear about the background and story of the new book and also an opportunity to buy a signed copy from the Author himself. Catering to be provided by local chef, Peter Wolfe and books to be displayed and sold by Berkelouws Eumundi.

Ian McPhedran is a Sydney based author, defence writer and war correspondent. Between 1990 and 2015 he covered conflicts around the globe in places such as Burma, Indonesia, PNG, Somalia, Cambodia, East Timor, Afghanistan (six assignments), Iraq (three assignments) and the Solomon Islands. He was based in Baghdad to report first-hand on the 2003 US-led ‘shock and awe’ bombing campaign and the coalition invasion of Iraq.

He has published eight books including the 2005 national bestseller ‘The Amazing SAS’, as well as ‘The Smack Track’, ‘The Mighty Krait’ and most recently in September 2019 ‘Where Soldiers Lie’ – the quest to find Australia’s 35,000 missing war dead.

What drives veterans, military experts and forensic investigators to dedicate years to search for and identify the remains of fallen warriors? What does it mean to the families of the dead to be able to lay them to rest?

Over thirty-five thousand Australian soldiers and airmen are still listed as Missing In Action from the wars of the 20th Century.

Telling the moving story of the determination and skill of the searchers who apply old-fashioned detective work and cutting-edge science to solve the mysteries of the missing and bring peace of mind and solace to their families and to all those who serve, Where Soldiers Lie follows these investigators and scientists on their mission to locate and identify unrecovered war casualties and to unlock their secrets. From the jungles of Vietnam, where one man led a decade-long battle to recover and bring home the final six, to Korea, Papua New Guinea and the fields of the Somme, Flanders and Fromelles,

Where Soldiers Lie is a deeply human story of perseverance, luck and resolution, a story of incredible determination against difficult odds, of exacting forensic analysis and painstaking detective work, to uncover and identify the remains of Australian soldiers, in battlefield over the decades, and to bring their remains home.